During the last few decades of the 20th century, manufacturing nationwide experienced a surge in technological tools that led to vast improvements in overall productivity. Among the most significant advancements were the adoption of personal computers and computer-aided design and manufacturing (CADCAM).

Other new technologies, such as numerically controlled machines and programmable controllers—combined with process improvements like total quality management (TQM), just-in-time, lean, Kanban and Six Sigma—all made a tremendous impact on efficiency and productivity in numerous industries.

Entrematic Loading Dock Products (LDP) is actively embracing several smart manufacturing initiatives that ultimately translate into important benefits for our valued Kelley and Serco brand distributors and end-user customers.  We’ll cover those in a moment.  But first, what exactly is smart manufacturing?

According to the Manufacturing Enterprise Systems Association (MESA):

Broken down individually, these consortium efforts include:

“Along with ongoing and consistent strong quality program support from management, we now have a very stable platform on which to build our operation and meet lean processes, such as our seamless flow and smart manufacturing initiatives,” explains Joe DeGraauw, Regional Service Manager, Quality Manager, Quality and Technical Services, Entrematic LDP.

From his own manufacturing perspective, Michael Eastabrook, Vice President of Operations, Entrematic LDP, says one of the key ways to ensure quality across the board with smart manufacturing is what he calls “velocity of data”.

During the past 12-18 months, Entrematic LD has placed a heavy emphasis on data capture at all touch points on the manufacturing floor.

That starts with order receipt and then calculating the standard product lead time until shipment.  Within that lead time, various other touch points include order entry, scheduling, the material planning cycle, material push to the manufacturing floor, sub-assembly welding processes, painting, final assembly, collecting testing data, serializing the product and then movement to the distribution center to await shipment.

“The ability for Entrematic LDP to communicate to our customers is directly influenced by how fast we can update data from the manufacturing floor and how fast that data is communicated to our customer service group, supervisors, and management team so they can, in turn, make adjustments to ensure we meet our committed delivery dates,” explains Eastabrook. “We just don’t want to know when a product is finished, but also all of the critical data involved from the time customer service enters an order into our system.”

Eastabrook emphasizes that it’s also important that once raw material arrives for production, that the flow of that material is also sequential with the flow of data and all moving at the same speed.

The customer’s need to know

“From a customer benefit standpoint, smart manufacturing comes down to a customer needing to know the status of their product from the time they place an order until the time it shows up at their job site,” says Eastabrook.  “The more data gathered, the more we can communicate with the customer during the manufacturing lifecycle.  We’re also better able to identify problems early and address them more efficiently. Our goal is that once our customer touches Entrematic, we want to provide them as much rich and real-time information as possible so they can plan their installs and off-loading in the future.”

Because raw data capture can in some cases become as much of a restraint as raw material bottlenecks and other issues, Entrematic LDP is always looking for ways to improve on and fine tune its approaches to smart manufacturing. 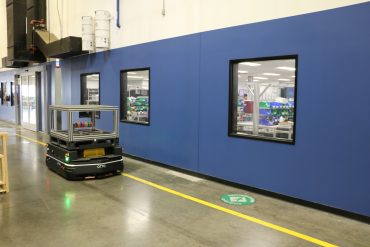 The Clearpath transporters act as self-driving vehicles to move small parts around pre-programmed routes within the facility. However, the transporters are intelligent enough to make their own route adjustments when needed.

In addition, the Carrollton facility is now using a Universal Robots robotic arm that works in conjunction with personnel for various tasks on the manufacturing floor. The facility will add two additional robotic arms in 2017.  Further automation plans at Carrollton include heavy robotic welding for dock leveler frames and top plates. Entrematic LDP is also planning to upgrade its current robotic technology at its Reynosa, Mexico facility.

“Without a doubt, smart manufacturing and quality are both intertwined,” Eastabrook says, adding that, “What’s really key is making sure our distributors and customers receive what they expect.”

He further points out that one way to describe manufacturing in today’s world is “mass customization,” adding, “Stop orders are constantly changing. Getting the right information accurately entered into the ERP (enterprise resource planning) system and then communicating that information back to the distributor in a seamless method so what they’ve ordered matches what they receive is critical.”

Eastabrook concludes, “Smart manufacturing ultimately benefits the end-product user by controlling manufacturing costs and having the right material at right time. In the end, the better and higher the data velocity, the easier it is to forecast material demand, and the more accurately we can communicate with all of the stakeholders—distributors and customers included—all the way down the supply chain.”